The Green Sanctuary Program of the Unitarian Universalist Association of Congregations (UUA) and the Unitarian Universalist Ministry for Earth (UUMFE) invite you and your congregation, as you come back together for the church-year, to dedicate a few moments, a worship service, a month, or a year to reflect on the recent disasters in the Gulf of Mexico.  Many congregations have an annual tradition of a water ceremony/communion at the beginning of each year.  Consider connecting the themes of water with the Gulf of Mexico and our connections to the disasters and hope that can be found there.

August 29th, 2010 marks the 5th anniversary of Hurricane Katrina.  Hurricane Katrina caused severe destruction along the Gulf coast from central Florida to Texas.  The most severe loss of life occurred in New Orleans, Louisiana, which flooded as the levee system catastrophically failed.  Eventually 80% of the city and large tracts of neighboring parishes became flooded, and the floodwaters lingered for weeks.  Hurricane Katrina is considered the costliest and one of the deadliest hurricanes in the history of the United States.

As the news of the horrible aftermath from Hurricane Katrina filtered in, the UUA and the independent Unitarian Universalist Service Committee (UUSC) mobilized to find a way to help the victims of the devastation. The UUA-UUSC Gulf Coast Relief Fund (GCRF) raised more than $3.7 million dollars.  Congregations and individuals stepped up to face the disaster and injustice in Louisiana, Mississippi and Alabama. Ministers and staff people worked with Gulf Coast congregations to continue their ministry amidst recovery efforts. Unitarian Universalists (UU) traveled to the Gulf Coast to support area residents, UU and non-UU alike, in rebuilding and recovering their homes and their lives.

Today, thousands of displaced residents in Mississippi and Louisiana are still living in trailers and struggling to reclaim their lives.  Specifically three UU congregations continue to struggle with the after-effects of Hurricane Katrina. 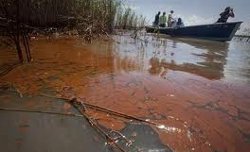 The April 20th, 2010 the Deepwater Horizon drilling rig explosion marked the beginning of what has been come to be known as the BP Oil Disaster.  It is the largest marine off-shore oil spill in the history of the petroleum industry.  Months after the initial explosion, the leak was capped.

Communities that were still struggling to recover from the effect of Hurricane Katrina now face extensive damage to three of the largest sectors of the economy including fishing, tourism, and oil industries.  Oil has destroyed marine and wildlife habitats and the health consequences from both the oil and dispersants are yet unknown.  People who leased out fishing boats for the season continue to owe rent though they’re unable to make money when fishing areas are closed and contaminated.  Non-profit and religious service organizations which provide extra assistance for basic needs are being depleted.  The mental health impacts of a disaster of this scale are great.  The most vulnerable peoples are hit the hardest by rippling impacts of this kind of disaster.

All of us have been deeply affected emotionally and spiritually from this disaster, especially knowing our extensive addiction to oil, and the slow pace and inadequate scope of clean up.

Grounding
At General Assembly in Minneapolis, delegates passed the Gulf Coast Environmental and Economic Justice Action of Immediate Witness.  This AIW specifically calls for UUs to:

Resources
Join the Green Sanctuary Program and the UUMFE in reflecting on the recent calamities in the Gulf of Mexico.  Take action in response to the injustices of the environmental and man-made catastrophes.  Sample sermons, vigils, chalice lightings, and more are available on the Ecological Disasters page of WorshipWeb including rights to play or access to sheet music to have your choir sing emma’s revolution/Pat Humphries + Sandy O song, “Bound for Freedom,” which includes a verse about the Gulf Coast.  Information on the 10/10/10 Global Work Party for Climate Justice will be available soon, with information specifically for UUs on the UU Ministry for Earth website on 10/10/10.

Register your participation in reflecting on the Gulf Coast and report back to us to let us know what you do!

To a more just, greener faith community and world,