Peaceful Uprising: Defending a Liveable Future Through Empowering Non-Violent Action is asking folks to Show your Support, Speak your Truth, and Take a Stand! 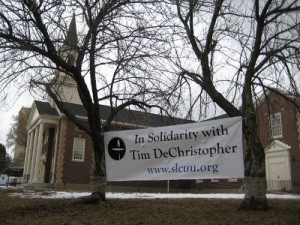 On July 26th 2011, climate activist Tim DeChristopher will be sentenced at the Salt Lake City federal courthouse. On March 3rd, Tim was found guilty of two felony counts for participating in a peaceful act of civil disobedience. He could face up to ten years in federal prison, along with a $750,000 fine, for outbidding coal, gas, and oil companies as they attempted illegally purchase thousands of acres from the public.

Today, Unitarian Universalist Association of Congregations (UUA) has shared information about this debacle through the use of UUA social media.

How is it that participating in the American tradition of peaceful civil disobedience, a historical tool for social change,  a crime?