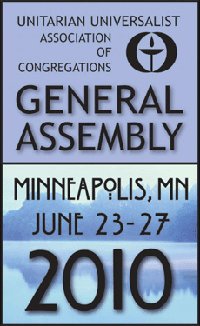 The Unitarian Universalist Association of Congregations’  49th Annual General Assembly in Minneapolis, Minnesota is only 14 days away.

General Assembly, GA, is our yearly meeting of congregations where we come together “to take part in the governance of our Association, to build together a vision for its future, to learn from each other, to work, talk, play, and imagine together, to grow together” (from the opening of the General Assembly Program).

For those of you who can attend GA:

Check out the inside back cover of the Program book to learn more about “greening” the 2010 General Assembly.

Participate in the UUMFE’s Annual Meeting, Friday, June 26th 6pm at Central Lutheran Church.  There will be a light supper and networking, a brief meeting to elect UUMFE board members, a conversation about climate change and Earth Justice and what might be UU’s unique role in moving towards solutions. At 7:30pm, the film, No Impact Man, will be shown.

Join in the Environmental Justice Passport project.  Visit the Congregational Life, UUMFE, UU Service Committee (UUSC), and UU Statewide Advocacy Networks (SANs) booths to pick up your passport and learn more about the project.  At each booth you can “collect” stamps in your passport for actions endorsed by each organization.

Stop by the Congregational Life “booth” #642 in the Exhibit Hall to look at Accredited Green Sanctuaries’ scrapbooks to get ideas for Green Sanctuary projects and/or pick up a copy of the interfaith environmental film Renewal  and its accompaning study guide.  If you have questions for Robin you can stop by “the booth” and leave a message and she’ll be sure to get back to you as soon as she can.

Attend Plenary VI to participate in the debate and vote on the Business Resolution: The Green Revolution in Religion.