The First Unitarian Church of Omaha in Nebraska decided that one of their main environmental justice projects would be lobbying for better recycling in their town and state. 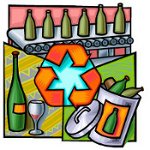 They actively lobbied the Mayor of Omaha and City Council members to permit recycling of all types of plastics. The result was that on April 18, 2008 Mayor Fahey announced that several additional types of plastics would now be recycled in Omaha, thanks in large part to citizen input.

They also joined their lobbying efforts with those of other concerned citizens and environmental groups to lobby members of the Nebraska unicameral legislature to support statewide recycling of electronics waste, specifically LB 986 sponsored by Senator Priester. This second effort was a tremendous success, at least with their state’s legislature, if not with their governor.  The legislature passed Senator Preister’s electronic waste recycling bill by a vote of 42-4 on the last day of the 2008 legislative session.  Unfortunately, Governor Heineman vetoed it.  On April 23, the Lincoln, NE Star Journal published an article concerning the Governor’s veto and the groups represented in the lobbying effort, including specific mention of the Green Sanctuary of First Unitarian Church of Omaha.