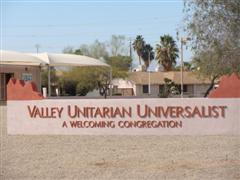 Valley Unitarian Universalist Church (VUUC) in Chandler, AZ became an accredited Green Sanctuary on March 10, 2010.  In their accreditation application, in response to the Green Sanctuary Program Goal “To build awareness of societal environmental issues among UU’s” they wrote “We believe that we have substantially increased awareness of environmental issues among UU’s, especially those related to living in the desert…water conservation and limiting use of electricity for air conditioning.”

VUUC, through simple measures, was able to become more responsible stewards of their desert environment!  And set an example of how small changes could make a big difference to their members.