“Ever see your electric meter spin backward? It may sound like a dream at a time energy costs are as high as ever, but at the Unitarian Universalist Church at Washington Crossing (UUCWC), it’s a dream come true. 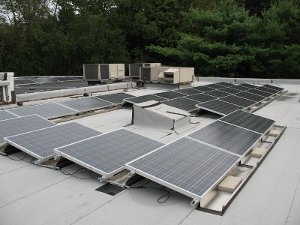 UUCWC has installed a 9.5-kilowatt solar energy system that allows it to generate about 90 percent of the electricity it uses from the sun. Leaders from the Hopewell Township congregation marked the system’s activation with a ceremonial “throwing of the switch,” Sunday, Oct. 5, 2009.

Almost two thirds of the $76,000 system was funded through the New Jersey Clean Energy Rebate Program, which provides incentives for the use of solar and other renewable energy sources. UUCWC’s endowment fund loaned the remainder of the tab. The system is expected to pay for itself in about four years, and will be productive for at least 25 years.

More importantly, the use of solar power reduces the load on the community’s utility grid and symbolizes the church’s stated dedication to stewardship of the environment.

“Solar panels represent one way Unitarian Universalists can walk our talk, affirming and promoting our principle of respecting the interdependent web of all existence of which we are a part,” says Pamela Shadzik, president of the UUCWC Board of Trustees. “I am proud that the members of the church were willing to invest in this remarkable technology, not only to reduce our carbon footprint but to help decrease our use of nonrenewable resources.”

The UUCWC system was installed by Advanced Solar Products (ASP), of Hopewell, N.J.  ASP Vice President Edward Seliga says the system prevents the release of about one ton of carbon dioxide into the atmosphere each month from conventional power plants.

“New Jersey has set a goal to produce 22.5 percent of its electric power from renewable, non-polluting sources by 2021, and the Unitarian Universalist Church at Washington Crossing is helping to lead the way,” says Seliga. “We rely on pioneers like these who make sustainability a priority in our communities.” 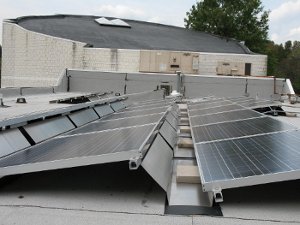 The system is simple. Photovoltaic cells in the solar panels, installed on the roof of the church, capture sunlight and translate it to direct current (DC). This current is directed into an inverter, which converts it to alternating current (AC) that powers the church. When the system is running at full capacity, excess energy is fed back into the utility’s power grid — causing the electric meter to “spin backward,” resulting in a credit on the church’s electric bill. The system is not equipped with batteries to store excess energy generated during the day, so at night, the church still relies on the utility grid for electricity but the excess power credit created during the day pays for most of the cost.

The process was two years in the making, says Philo Elmer, the co-chair of UUCWC’s Green Sanctuary committee who spearheaded the effort. “Money in the state’s rebate program for solar projects was running out, and we filed our application just in time,” says Elmer. Most of the time since then, he says, has involved waiting for the state to release the money and preparing for municipal inspections. The actual installation process took only two days.

The ceremonial event Oct. 5 included tours of the system and theme music, such as the 1969 Fifth Dimension show tune “Let the Sun Shine In,” by the Crossings Chorale. At the event, UUCWC’s minister, Rev. Charles J. Stephens — whose own home is powered by solar panels on its roof — said harnessing the sun’s energy is an important part of his own spiritual discipline.

“Much of my sense of the sacred comes from the holy book of nature,” said Stephens. “The sun illuminates us in mind, body, and spirit.”