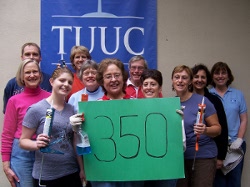 Interfaith Power and Light announced the winner of this year’s Cool Congregation contest. Towson Unitarian Universalist Church (TUUC), in Lutherville, Maryland, accepted the $5,000 cash prize for the most reduction in energy use. Carel Hedlund, Chair of TUUC’s Green Sanctuary Committee, said, “our actions focused on three areas: energy efficiency of our building, educating our members on ways they could make changes in their own lives to reduce their individual footprints, and participating in energy efficiency community projects. We are very excited and grateful to win this prize. Our Board has voted to place the award funds into reserves for further ‘greening’ of the church.”

The Cool Congregation contest challenged participants to calculate a starting carbon footprint, and then compare a year later after making energy saving changes to measure total reductions. The contest was open to approximately 10,000 congregations nationwide. “We wish to congratulate Towson Unitarian Universalist Church for being good stewards of Creation,” said The Reverend Sally Bingham, president of Interfaith Power and Light. “They have demonstrated a real commitment to making their congregation as energy efficient as possible and in the process have provided a wonderful role model for other congregations wishing to address the threat of climate change.”

Towson Unitarian Universalist Church is a 50-year old congregation in suburban Baltimore with many glass windows and skylights. According to Hedlund, they set out to reduce their carbon footprint by first conducting an energy audit.  It was no surprise that the audit revealed a need to seal the old windows and the duct system. Hedlund estimates air leakage in the meeting room has been reduced 67% and heating and cooling capacity improved by 25%. Next, they installed solar film on skylights and on a large, southwest-facing window in the sanctuary and swapped out old light bulbs for energy efficient ones. They just recently replaced the front doors and one side door. They also purchased carbon offsets for some staff travel and 50% wind power through their utility. Interfaith Power and Light estimates that TUUC’s total carbon footprint has been reduced by nearly 20%. This is not TUUC’s first environmental award. In April 2009 they were accredited by the Unitarian Universalist Association as a “Green Sanctuary”.