“The Unitarian Society of Germantown (USG) is a great example of the faith community’s engagement in sustainability.”  So read one recognition of this congregation by Philadelphia’s RecycleNOW.

For many years, USG worked with a local food cooperative, Weavers Way, by providing the USG parking lot as a recycling collection spot.   Then, starting in 2007, USG became an active supporter of RecycleNOW in furthering recycling efforts in Philadelphia.

Joe Walsh, a USG congregant and one of the co-chairs who began the church’s Green Sanctuary Committee, became interested in the city’s environmental politics.  He re-formed the at-the-time defunct Northwest Philadelphia chapter of RecycleNOW (R-NOW), a grass-roots city-wide volunteer organization, whose purpose was to lobby for improved city-wide recycling practices.  Carolyn Scott, also a USG Green Sanctuary Committee member, became the NW chapter’s scribe and then co-chair in 2008, when Joe stepped down from R-NOW. 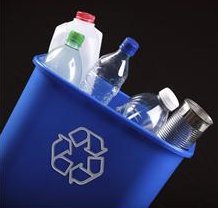 Since 2007, USG has graciously hosted, without fee, the Northwest R-NOW’s monthly meetings.   When R-NOW obtained hundreds of big blue recycling bins to distribute in a recycling education/information/dissemination effort, USG became the unloading dock.  The bins literally lurked behind the bushes in USG’s grove for awhile! Through this tri-fold partnership—USG’s Green Sanctuary Committee, the City of Philadelphia, and RecycleNOW— 1,200 blue recycling bins were distributed.

In recognition of its good work, USG’s Green Sanctuary Committee was honored as a “Hometown Hero” in 2008 by the steering committee of RecycleNOW.