Rev. Walker began by noting that the congregation had been kept “comfortable” for many years by an energy system that allowed coal miners to “die deep beneath the Earth, mountaintops to be torn apart, soils to wash into the sea, and streams to turn orange with acid and metals.”   She said the congregation has decided to enter a new world “where lives are not devalued and the Earth is respected.”

Turning to the unit, she said “Today, I offer these words for our old-world heating and air conditioning system: You have served your duty. But your time is up. We say ‘no more’ to what you represent. We created you in a time of need and we shall terminate you now for our needs have changed. We have created your replacement.”

Board of Trustees Chair Joan Darrah stepped forward to cover the unit in a tasseled black cloth, as Rev. Walker pronounced, “Your existence is over, as ours begins anew.” 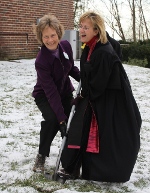 With that, Rev. Walker and Ms. Darrah, broke ground for a new geothermal heating-cooling system, that together with solar panels, will allow MVUC’s 5,200 square foot meeting house to become a net zero user of energy from the grid by spring, possibly making it the first church in Virginia to do so.

As she took the shovel, Rev. Walker said, “May this represent the turning over to a new future of living our deepest values.”

Inside the Meeting House (which will actually continue to be heated by the old system for a few more months),  Rep. Moran praised the church for its leadership in converting to renewable energy. 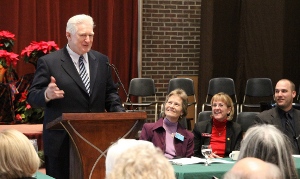 “Unfortunately, we will not be able to get new energy legislation through Congress this year,” Moran said.  “So programs must be done at the grassroots level, like here at MVUC, which has put its money where its mouth is. It is one thing to say wonderful, inspiring things and another to do them.

“MVUC could have gone the easy, cheap way and replaced its fossil fuel system, but it decided to do the right thing, and, as a result has set a high standard and become a national model. It is right for a faith-based community to help make a better future for our children. You found a way of using federal financial incentives and a creative company to make it work for you. You have made the right investment and others will come from around the country to see how you did it. This is a really big deal and I couldn’t be more pleased that it is being done in our district.”

Sen. Puller, who lives near the church, noted that, “This church has been on the cutting edge for many years. This project is historic.”

MVUC member Albert Weinstein, one of the instigators of moving to renewable energy, presented the church with a check for $10,000 toward the new system. Of his donation, Weinstein said, “A lot of people talk about solar energy. I decided to jump start the process.”

MVUC went through a months-long process of evaluating alternatives to its ailing conventional heating system.  According to the report of the committee, headed by Ken Pilkenton, the equipment costs of purchasing a new conventional system would have been about $50,000 plus maintenance and monthly utility bills, while buying, installing, and maintaining a geothermal system would have cost about $300,000, a very high initial cost for the church.

Then Zachary Fettig, President of Shenandoah Sustainable Technologies (SST) of Harrisonburg, Va., proposed to design, install, operate, and maintain a geothermal system under a 20-year contract, during which time MVUC would  make a monthly payment. SST was able to offer this long-term package through a combination of favorable private financing, various government tax incentives for alternative energy projects, and the virtually no-grid-based power consumption costs once all the equipment is in place. At the end of the contract MVUC would own the equipment.

The MVUC finance committee determined that the SST proposal was comparable to purchasing geothermal equipment, but without the high initial cost. The conventional option was somewhat  cheaper, but did not figure in likely increases in the cost of energy over 20 years or the environmental damage caused by burning fossil fuels.

MVUC wanted a system that met its environmental and social values, and also provided a solid investment for the future. Finding an affordable renewable energy system would fulfill a long-term dream of MVUC, which had constructed its Meeting House in the mid-1980s with the chapel roof designed for solar panels and with a previous generation of a geothermal heating-cooling system, which had failed after a time.

The church contracted with SST in late November and broke ground on the Winter Solstice.

The geothermal system relies on extensive underground fluid-circulating pipes branching-out from opposite ends of the Meeting House (which contains a chapel, commons area, kitchen, nursery, and church offices). The pipes are buried several feet underground where the ground maintains a steady temperature of about 55 degrees. SST will remove all of the Meeting Houses’ conventional heating and cooling equipment and replace it with state-of-the art geothermal equipment. In addition, solar panels will be installed on the south roof of the chapel to generate the electricity for the building and the heat exchange pumps for the geothermal system.

Last year SST installed a modern closed-loop geothermal system at St. Mark’s Church in Springfield, which has received praise from church officials there. The MVUC system is different in that it incorporates solar energy for electricity to make the Meeting House a net zero energy user from the power grid.

The transition will come none too soon, Rev. Walker said, “because the old system has required half a dozen visits from the furnace repair people in the past 10 days, including today.”