One of the major barriers of moving to sustainable energy sources in the US is the start-up costs.  Gary Nystedt, a resource manager for Ellensburg, WA, came up with a way to bring solar power to the city in a way that the start-up costs could be defrayed.  Nystedt suggested that the city build the country’s first community solar project, or “solar garden,” in 2006.  The city-owned solar installation would feed right into the city’s grid but would be financed like a cooperative, open to anyone who wanted to invest.  Because Ellensburg, the town, gets more that 300 sunny days a year and already owned a sunny spot of land next to a major highway (an added advantage is that the site allows for free advertisement of solar power to 15,000 drivers every day). 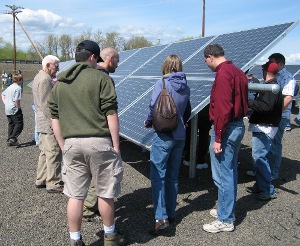 Kittitas Valley Unitarian Universalist Congregation, through a drive by the Green Sanctuary council, purchased a panel on the city’s solar grid.  KVUUC also completed many recommendations from their professional energy audit.  The result of these projects was a savings of 60% of the electricity bills during the winter months for the building, which generated kudos from the building owner as well as the congregation.  Additionally, their electric bill is now reduced by an amount proportional to the energy generated by the purchased solar panel.

Ellensburg Community Renewable Park now pumps an average of 102,000 kilowatt-hours of solar power into its grid each year. That’s enough to completely power about 10 average U.S. homes.  The two-acre site is now home to 10 huge solar arrays and there are plans to add six more arrays, 10 concentrating solar collectors, and eight small wind turbines.  The site has generated more than 217,000 kilowatt-hours of energy — enough to power 4,800 homes for one day, and keep more than 304,000 pounds of greenhouse gasses out of the atmosphere.

The community solar project allows people, business, and faith communities to participate in renewable energy production without having to buy a complete system, or having good solar exposure at their home or business.  KVUUC is proud that are participating in the nation’s first city-operated solar electric facility.  It proves that community solar power projects are possible anywhere there are passionate advocates of renewable energy, a forward-thinking utility company, and people who want to buy-in.