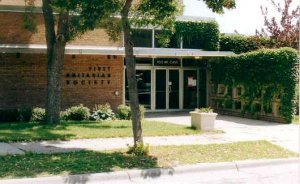 The First Unitarian Society of Minneapolis (FUS) won the 2011 ENERGY STAR National Building Competition: Battle of the Buildings in the House of Worship category!  The competition has energized the members of FUS and caused the team to think more creatively and enthusiastically about additional steps that can be taken.

When FUS first started bench-marking their energy usage with the ENERGY STAR for Congregations program they scored a meager rating of 28 (0-100 scale) for their building that was built in the 1950s.

Bruce Nelson, a congregational leader at FUS, assembled a team and identified ways to improve their rating. FUS negotiated a contract with the one person firm of  NFS,LLC to  restore control to the heating and ventilation systems in their building  by implementing numerous no- and very low-cost measures.  A relatively inexpensive ($7,200) Internet-accessible control system was added to restore night set-back control to the heating system.  The team also added winter window treatments to single glazed, and very leaky, aluminum-framed windows (installed in 1953) by covering  some with temporary plastic and sealing  others with a food-grade and odorless caulk.

The improvements allowed them to reduce their electrical use from 4.5 to 3.75 kWh per day, gas consumption from 83 to 70 Thm per day, and Energy Use Intensity (EUI) rating improvement from 159 to 131.  The EUI rating reduction of nearly18 percent resulted in their winning the House of Worship category.  Additionally, all of their hard work led to $16,000+ savings in one year!  By the time FUS finished they improved their ENERGY STAR rating to 54.

In May 2011 FUS hosted a Sunday discussion titled “FUS energy savings — $10,000 down: How much further can we go?” to inspire more energy conservation measures and brainstorm additional energy-saving ideas. More recently, the team held a public event to share information about the energy-saving measures put in place at FUS and how the improvements were financed – this event was open to the media and other houses of worship.

Bruce Nelson advises other congregations “First, benchmark your building’s energy performance to determine your potential for energy savings. Then focus first on no-cost and low-cost opportunities. I can guarantee opportunities are there to be found!”

For more information about their improvements check out the Clean Energy Resource Teams’ blog.