Ken Hutton, the Green Sanctuary Chair at Unitarian-Universalist Church of Canandaigua (UUCC), recently share that for their Earthday Celebration they sang songs such as “Happy Earthday…dear Gaia”  and “How Old are you now?” along with the following adaptation of the popular song “We’ve Got the Whole World in Our Hands.”

“We’ve Got the Whole Earth”

We are a Green Sanctuary, it’s in our hands  (3x)
We’ve got the whole Earth in our hands.“

After their celebration, they ate Earthday cake with a picture of our Earth on it.   Congregants filled out Earthday gift cards for what they would give to the Earth for next year and most importantly they had fun!

The UUA Leadership Council recently approved a fiscal year 2012 budget that included funding for a full-time Environmental Stewardship Manager at the UUA.  Robin Nelson, currently Congregational Stewards Services Program Manager, will transition to this position on July 1st, 2011.  (Since July 2008, Robin has worked with the Green Sanctuary Program one-third time.)  Beginning in July, Robin will focus on five components of environmental stewardship:

UUA President Rev. Peter Morales’ passion for environmental justice is reflected in the UUA’s decision to provide more resources towards environmental stewardship specifically through the creation of a full-time Environmental Stewardship Manager.  Most recently, Rev. Morales has shown his commitment to the environment through his participation in the UUA 40 Day Challenge for Earth Day video.

The Unitarian-Universalist Church of Akron in Akron, OH started out their Green Sanctuary Program on a positive note by working with their Board of Trustees to pass the following resolution (adopted on Febrauary 21, 2007):

“RESOLVED that the Board of Trustees of the Unitarian-Universalist Church of Akron endorse the plan of the Green Team Committee to prepare for candidacy in the Green Sanctuary Program sponsored by the [Unitarian Universalist Association].

We understand that the Green Team will conduct an environmental audit of the church, will design a program and action plan including twelve activities to be completed by the congregation as a whole, will work closely with other committees in the church, and will bring Green Sanctuary candidacy to a vote to the congregation before applying for formal candidacy from the [Unitarian Universalist Association]. 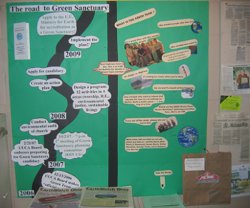 We go on record as endorsing its ultimate success for our church.”

Once they introduced the idea to the congregation they created a Green Team Bulletin board that depicted the “Road to Green Green Sanctuary.” 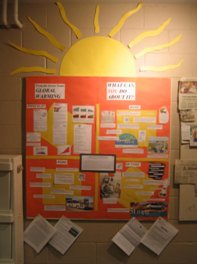 Since then, they have updated the board featuring global warming and will continue to “make use of this important space as we implement our action plan and work towards accreditation.” 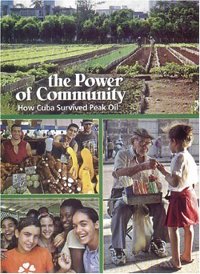 I saw this movie a week ago and I can’t stop talking about it. It is absolutely the most uplifting movie I have yet seen on the topic of the multiple pending environmental disasters towards which the human species seems to be careening.  With the dissolution of the Soviet Union, Cuba abruptly lost 80% of its import-export business.  For a tiny island producing only three cash crops and heavily dependent on foreign oil, foreign food, and petroleum-based fertilizers and pesticides for the food they did produce this was catastrophic.

Immediately they faced what oil geologists tell us we will all face: a peak oil crisis.  Peak oil is the term used to describe the phenomenon experienced when the production of oil, a finite resource, reaches its peak and begins to rapidly decline.  In short, we will run out of oil.  We in America, similar to Cubans in the late 80’s, are dependent upon petroleum-based pesticides and fertilizers, and oil-guzzling tractors and combines as well.

The situation in Cuba was dire.  People on their way to work had to wait four hours for a bus, only to find that there was no work due to power outages or lack of supplies.  They then had to wait another four hours for a bus home.  Within weeks, children were showing signs of malnutrition and babies with low birth weight were born.

I will not ruin the surprise and tell you how they got themselves out of that mess, but only that they did and how they did it is a lesson for all of us, which is what makes the movie so uplifting and worth seeing.  As a sneak peak, I will say that currently, 50% of the food in Havana is grown by organic urban agriculture.  My friend who’s a habitat biologist tells me their coral reef is the healthiest on the planet.  That means there’s hope for Earth yet.

The UUA and the Green Sanctuary Program are excited to announce that we’ll be co-sponsoring an EnergyStar training webinar.

To attend this training session, you must first register for it.
Once you have registered for the session, you will receive an email message confirming your registration. This message will provide the information that you need to join the session.
The training session is to introduce congregations to the EnergyStar for Congregations Portfolio Manager.  If you are unable to attend this session it will be recorded and available on-line after the training session for you to “attend” at your leisure.
The UUA is encouraging all congregations, especially Green Sanctuary involved congregations, to join EnergyStar for Congregations.  One of the most useful tools that they have is the Portfolio Manager, which can benefit your congregation in many ways including:
*Managing of Energy and Water Consumption for All Buildings
*Rating Your Building’s Energy Performance (versus other similar buildings)
*Estimating Your Carbon Footprint
*Setting Investment Priorities
*Verifying and Tracking Progress of Improvement Projects
*Gaining EPA Recognition (like the UU Congregation of Atlanta and First Parish in Needham)
I hope that you will consider attending this training.

If you haven’t seen it already, check out the UUA 40-Day Challenge for Earth Day video on the homepage of UUA.org. The video culminated in an UUA Chapel Service that I co-led yesterday (we have Chapel on Tuesdays at the UUA) Sacred Waters – A Chapel Celebrating Earth Day. I wanted to share the Chalice Lighting reading.

“We All Live Downstream” from the book Water Consciousness: How We All Have to Change to Protect Our Most Critical Resource edited by Tara Lohan.

” ‘We all live downstream.’
We are connected to each other by our dependence on water and our participation in its use.
Overtime, water has been our world’s architect – carving and sanding stone, breathing life into forests, testing the patience of deserts.
But water has also been the architect of our communities, enabling us to put down roots along the banks of rivers and build lives as deep as our wells.
How we use or abuse our water resources has shaped the kinds of communities we live in and the land that surrounds them.”

How do you use or abuse water resources?  Can you think of ways to change these habits/patterns? 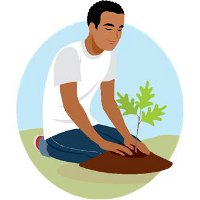 In honor of this very special day, we thought it might be timely to post some information about environmental service projects that youth might be interested in. Activism is essential, and today’s youth are strong advocates for Earth justice. For those of you out there looking to engage in some projects on Earth day, or in the days and weeks that follow (or, even better yet…everyday!) here are some ideas. These all come from a book by Barbara A. Lewis, titled The Kid’s Guide to Service Projects. There is an entire chapter dedicated to environmental service projects, and here are a few of my favorites. Some of these projects will be ongoing, some of them can be a one-time event. While these are very general, the idea is for individuals to take the service project and adapt it to the area in which you live. Enjoy!

There are many more ideas on how to get involved in community activism and Earth justice, and these are just a few general ideas that may help you get started. Remember, while some people may think that Earth day is only one day a year, we must encourage them to treat everyday like Earth day- participating in events and ongoing projects like these show that we are actively participating in Earth day everyday of the year!

Join us in celebrating Earth Day by taking the 40/40 for Earth Challenge. 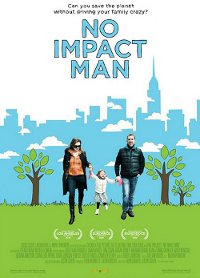 This movie won’t change your life, but it will give you some food for thought and spark some conversation.  It’s lighthearted and entertaining, and  worth seeing. In 2006 Colin Beavan decided to live a “no impact” life for a year, bringing his wife and daughter along for the ride.  Many reviewers have commented that its biggest obstacle of the movie comes right at the beginning, which is Beavan himself.  Initially, he’s not very likable.  He’s easy to pick on and dislike.

He goes to ridiculous extremes in his effort to “leave only footprints” on the Earth for a whole year.  For example, he outlaws toilet paper, starts a worm bin in the kitchen, and goes six months without electricity.  Somehow, via solar panels, he maintains an active blog site, allowing in the flood of criticism his radical choices draws from mainstream America.  You will want to criticize him, too.  But in the end you will find yourself won over by his sheer humanity.  Toward the end the documentary films him talking to school children about his project, which are by far the deepest, most moving moments of the film and redeem the entire project.  You can see exactly how much he’s learned in a year, regardless of how self-serving his initial motives may have been.

Watching this small family go through the struggles involved in this project raises questions for each of us.  How far am I willing to go for the environment?  Which impacts are necessary, and which others can I forgo for the sake of my commitment to economic and environmental justice?  How do I engage the seven principles—which include the use of the democratic process in decision-making—when engaging other members of my family in making lifestyle changes to promote sustainability?

This sample Green Sanctuary Covenant comes from the First Universalist Church of Denver.

“We the members of First Universalist Church of Denver and Participants in the Green Sanctuary Program: